Poems from the following poets and read by Richard Armitage.

My favourite 2 from this collection are:

Elizabeth Barrett Browning ~ How do I love thee? Let me count the ways.

Just has the beautiful flow of expression of love.

Alfred, Lord Tennyson ~ COME into the garden, Maud,
For the black bat, Night, has flown,

I’m a sucker for Tennyson since the day I read Agatha Christies ‘The Mirror Crack’d from Side to Side” which has the following quote in the novel from the poem ‘The Lady of Shalott’,

“Out flew the web and floated wide;
The mirror crack’d from side to side;
‘The curse is come upon me,’ cried
The Lady of Shalott.”

I just find the imagery of his words, creates the pictures he is trying to convey into my mind.

All the poems are beautifully recited by the actor Richard Armitage.

Included in this collection are:
• “How do I love thee?” by Elizabeth Barrett Browning
• “Sonnet 116” by William Shakespeare
• “Annabel Lee” by Edgar Allan Poe
• “To Be One with Each Other” by George Eliot
• “Maud” by Alfred, Lord Tennyson
• “To His Coy Mistress” by Andrew Marvell
• “Bright Star” by John Keats
• “Love’s Philosophy” by Percy Bysshe Shelley
• 1 Corinthians 13:4-8
• “Meeting at Night” by Robert Browning
• “The Dream” by Edna St. Vincent Millay
• “The Passionate Shepherd to His Love” by Christopher Marlowe
• “I carry your heart” by E. E. Cummings
• “She Walks in Beauty” by Lord Byron
• “Give All to Love” by Ralph Waldo Emerson.

This was a ‘Members Only’ free gift from Audible UK.

Gerald Smithson, master leathersmith, has ample reason to distrust mages. He doesn’t take their commissions and steers clear of them wherever possible. When Lord Leo Harris tries to hire him, Gerald sends the mage packing. Unfortunately, the simple act of Leo entering his shop brings Gerald to the attention of a Dark mage who kidnaps him as a chance to get to Leo. Now Leo must not only rescue Gerald, but find a way to win his heart. It will be an unusual courtship, to say the least.

An explosive prequel to the Mage and the Leathersmith book #1 – A Most Unusual Wedding.

This is the second time reading this enjoyable steam punk M/M romance in readiness to start the next book in the series…A Most Unusual Wedding, and still as good as it was the first time round.

This prequel is still available to download for FREE. 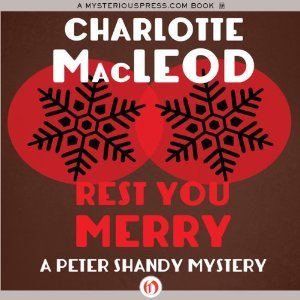 The first book in the Peter Shandy mysteries by Charlotte MacLeod, in a 10 book series.

This was the audiobook edition narrated by John McLain.

Peter Shandy, college botany professor, and librarian Helen Marsh Shandy solve murder mysteries in Balaclava County, Massachusetts.
With the festive season in full swing at Balaclava College, professor Peter Shandy is not feeling in the festive spirit.  After refusing to allow the Christmas committee to decorate his home on the hill for yet another year, he decides to take the Christmas break away from his normal yearly routine.  But before going he decides to leave a little present for the Christmas committee that they will not forget!
What he doesn’t expect to find on his return is a dish of marbles scattered over the floor and the dead body of his friend and working partners wife and head of the Christmas committee behind his sofa!
It looks like she slipped off the ladder trying to remove some of Peter’s window decorations.
The campus security and the local police are quite willing to put it down as an accident,  but Peter thinks it is murder, when he finds that one of his nieces marbles is missing.
So it is left to Peter, with the help of Miss Helen Marsh to find a killer within the college campus.

Charlotte MacLeod story telling is light, fun and totally enjoyable.  Weaving a magic of colourful characters and situations that will keep you glued to the page from start to finish.

Ms MacLeod’s books are ones I can enjoy many times over, and still get the freshness and the delight as I did when I first read them many years ago.

John McLain’s excellent narration kept the story moving with the lightness and fun that Ms MacLeod aimed for, and is well worth listening to.