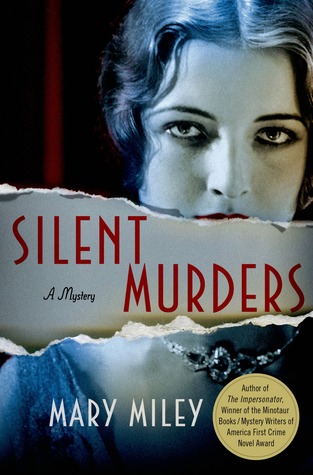 Vaudeville actress Leah Randall took on her most daring role ever when she impersonated missing heiress Jessie Carr in order to claim Jessie’s inheritance in The Impersonator.  Now that the dust has settled around that tumultuous time in her life, Leah has adopted Jessie’s name as her own and moved to Hollywood, where she’s taken a modest but steady job in the silent film industry.

Jessie’s thrilled when Bruno Heilmann, a movie studio bigwig, invites her to a party. She’s even more delighted to run into a face from her past at that party.  But the following day, Jessie learns that sometime in the wee hours of the morning both her old friend and Bruno Heilmann were brutally murdered.  She’s devastated, but with her skill as an actress, access to the wardrobes and resources of a film studio, and a face not yet famous enough to be recognized, Jessie is uniquely positioned to dig into the circumstances surrounding these deaths.  But will doing so put her own life directly in the path of a murderer?

The glamorous setting of Hollywood in the 1920’s silent movie era and the scandals of the time, with bribery, corruption…murder is bound to happen.

Well written and plotted, with a great cast of characters, real and fictitious.  The mystery has plenty of twists and turns.  This mystery is a page turner from start to finish.

A most enjoyable read.