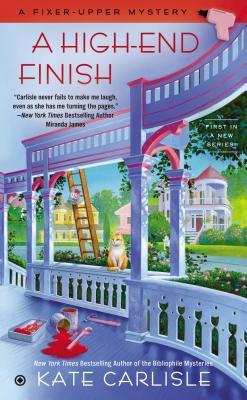 First in the Fixer-upper mystery series.

Read the paperback when it first came out.  Now I have gone back and listened to the audiobook.  Which is well narrated by Angela Starling.

Home-renovation and repair business is booming, in the seaside town of Lighthouse Cove in northern California.  And aptly named Shannon Hammer is the best in the business.

When the body of  a previous blind date, ends up dead on one of her work sites.  Murdered with one of Shannon’s signature pink work tools.  Shannon becomes prime suspect.  When a second murder happens, with another of Shannon’s tools.  She has to now clear her name, before the New Chief of Police arrests her for double murder.

With a good set of characters, in a well plotted and written mystery.

I loved and enjoyed this mystery the first time round, and it was even better listening to the narration from Angela Starling the second time.